Evidently, the memorial list cannot simply be placed at the visitors’ disposal in the reading room. Anyway, it was not possible to consult the memorial list in the reading room before the restoration either: its physical condition did not allow this. Yet for researchers, some versions were available. The hardly reliable “painters’ selection” in J. Gaillard’s work, De ambachten en neringen van Brugge, published in 1854 (see bibliography), was replaced by the entire publication as early as the 19th century

by Charles Carton in 1862-63, without any introduction or explanation though. A really critical publication, yet with the misleading title Obituaire de la Confrérie des Peintres, was made by the Bruges state archivist Charles Vanden Haute. Vanden Haute’s version has a lot of merits. It is complete, reliable and well founded from a scientific point of view. Furthermore, Vanden Haute’s publication deals with all important sources with regard to the trade members: he also published the preserved register (1453-1578 and 1618-1781) and the trade boards’ annual renewals (1362-1613). Thanks to Vanden Haute’s publication, the complete text of the memorial list was preserved after the damage of 1944 as well. So in the 19th and 20th centuries researchers always disclosed the memorial list in their own way. In the 21st century, a third way of disclosure has been chosen: the memorial list on the internet, where both the transcription (Vanden Haute’s text, compared with the manuscript) and the 64 pages of the original manuscript on are at the disposal of researchers and people interested. Visitors of the website can consult and excerpt the memorial list, by means of a search glossary, containing the ca. 900 names and nine trade categories, by means of the pictures of the original edition (directly referring to the transcription 2001), and by way of the transcription 2001 (directly referring to the original  manuscript’s picture). Of course, any person interested can virtually browse through the original book. This way the memorial list can be restored and preserved in the best way while it is being disclosed in the best way at the same time. 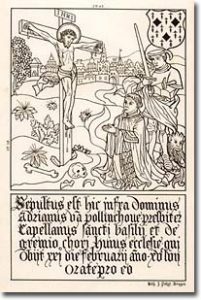 Besides the trade members, the memorial list also mentions the chaplains of the painters’ chapel, among others Adriaen van Polinchove, who died on 21 February, 1558 and whose memorial stone, originally in the Church of Saint Donatian, is now still preserved in the Chapel of St Basil in the Burg Square.